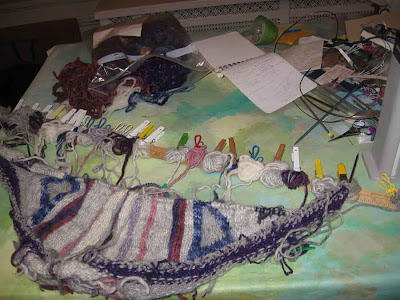 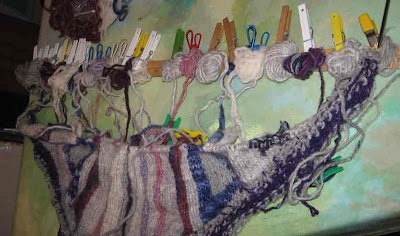 Finally cleared away enough space to resume work on The Thing. Borrowed yarn organizer technique from Susanna Hansson's  Mittens from Rovaniemi lecture.
Posted by boobookittyfug at 9:33 PM No comments:

What Not to Knit When Donna asked me to blog about cats and knitting, the first thing that came to mind was the saga of Pussywillow and the Sweater.

Pussywillow was a tiny Oriental Shorthair, named after her toes, which looked and felt exactly like pussywillow catkins. Willow was an affectionate cat, usually good-tempered and only a little shy with strangers. Typical Siamese/Oriental personality. She had a brief show career, earning a name longer than she was: Champion Tombar’s Pussywillow of Mrp. She often got cold in the show halls, and I decided to knit her a sweater. This was in the Olden Days, when I had no money. Most of my yarn was from Harriet's, the local “dime store,” and from its sale bin at that. I had some cheap acrylic sport weight in a harvest gold color with multicolor tweedy flecks in it. Nice contrast with the lavender/cream tortie colors of her fur. So I measured her, and designed a little sweater in a moss stitch pattern, and knit it up.

She endured this thing for exactly minus two seconds. This tiny mellow cat bit me in her frenzy to get the thing off before I'd finished putting it on her. I unraveled it.

I do not know what became of the yarn, but I do know that it is no longer a part of my collection. If it were, I would take a picture of it just to show you how hideous it was.
Posted by boobookittyfug at 8:47 PM No comments:

Pay no attention to the blonde behind the curtain

or, Why I Have Not Posted

On October 1, I found my father on the bathroom floor where he had fallen and was too weak to stand. The paramedics took him to the ER. He had internal bleeding that was not stopping. He was on warfarin therapy and had been taking an antibiotic that (unknown to me) potentiated its effects. His blood pressure was very low and he was dehydrated. I feared it was the end. Although he survived, this was the start of a series of adventures that took all my strength and then some.

Between my Dad's medical problems and my Mom's Alzheimer's, requiring 24/7 supervision, I did not touch a needle again until just before Christmas.

Things are more stable now, with the help of some wonderful folks from the Chicago Department on Aging's homemaking services and Vitas Hospice. I get some time to knit.

I started small -- some easy socks for myself, no brain strain. This soon escalated into adapting a simple sock pattern for part machine, part hand, and adjusting my ribber to meet the needs of the tight circle. I never did learn the KISS rule.

Oh, and I am not blonde any more. Photos soon.